This #indiethursday I’m doing something a little different and waving the flag for the Tales Of Hopeless Maine Kickstarter which is steaming its way towards its third stretch goal! There are just 4 days to go to support this awesome project so here’s all you need to know…

Do you like adventure stories? Steampunk? Monsters and magic? Dashing heroines, doughty heroes? Do you like Verne, Wells, Lovecraft and Burroughs? Well here are two cracking yarns that you are going to love, both based around the popular world of Hopeless, Maine and both with illustrations by Tom Brown himself.

Why are there two books in this Kickstarter? Because printing them together will cost less overall, and we can still give you the choice to buy one, or both of the books.

Hopeless, Maine (for those of you who have not yet visited) is an island lost in time. Haunted and tentacle beset, it is home to strange creatures and even stranger people. 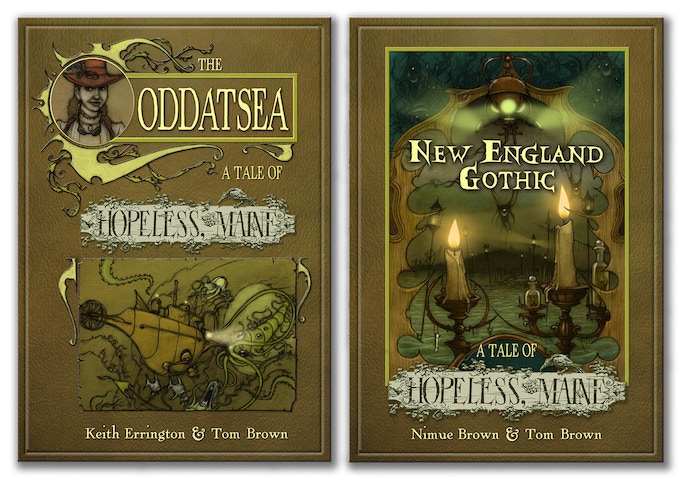 The Oddatsea is a set of four short stories that tell the tale of a Victorian adventuress; Lady Alison Pettigrew, who sets out in her steam-powered submarine to investigate the rumours around a mysterious island. Will she survive the perilous voyage? What befalls her? What does her dashing nephew Jason do? And how will it all end?

The first of these two Tales of Hopeless, Maine is written by Keith Errington, a professional, published author who writes comedy and adventure in equal measure. (You might also know his very best friend Count Rostov?)

New England Gothic is the story of Annmarie Nightshade, an orphan who becomes a witch on the island of Hopeless, Maine. There are betrayals, heartbreak and many dangers to overcome but there are also wonders, near escapes and strange journeys. You will meet dark sorcerers, a mad inventor in a lighthouse and the strangest familiar in the history of witchcraft.

This second tale is written by Tom’s partner and co-creator of Hopeless, Maine, Nimue Brown. It goes back in time to reveal the childhood and origin story of one of Hopeless, Maine’s most famous magical inhabitants – Annamarie Nightshade.

This is a prequel to the steampunk graphic novel series Hopeless, Maine. It stands alone but fans of the series will find much that they did not know, which will cast the events in Hopeless, Maine in an entirely new light.

This entry was posted on September 26, 2019 by Glitzy Demon. It was filed under #indiethursday, Uncategorized and was tagged with #GoodRead, #indiethursday, #MustRead, Indie Books, Indie writers, Kickstarter, steampunk.