True, some have called it an offensively ostentatious affair, filled with frivolous flamboyancy but we consider that such individuals are tasteless and we would never consider having them for supper.

Apparently the final battle between Wiz and The Goddess took place on the snowy peaks of Siberia. (Having visited Siberia ourselves recently we are, to be candid, a little sceptical of this assertion.) and so it is traditional to cover one’s self and immediate surroundings in as much snow as possible throughout the Wizmas season. The more snow you are seen to sport, the more you likely to convince The Good Folk of your allegiance to our supreme ruler.

Of course there is always the small problem that snow in The Scattered Isles is not the most common meteorological phenomenon. Still there are ways to fake snow and we have pushed the iceberg out this year on that front!

We have carpeted the entire floor in sheets of cotton wool batting (We did try white crepe paper initially but it wasn’t nearly as messy, irritating or difficult to remove, this cotton stuff soaks up the water from the cellar floor beautifully too!).

The strange chains (which hang from the walls and do not invite us to ask our landlord their purpose) we have piled high with a mixture of baking soda, white and blue glitter, a few drops of vanilla and peppermint oil and a tsp or two of water just to get it to hold together. As Freddy is also chained to the wall we have simply wrapped him in tissue paper to keep him out of sight.

Upon the tea table, we have carefully sculpted a pyramid from ‘snow balls’. These were made by mixing glitter (again) with coconut flour and a little cold water.

Sadly we no longer have any windows, this being a cellar afterall, otherwise we could have stuck baking parchment over them to make them look ‘frosted.’

As for our own attire, we have given eachother a fairly good dusting with white glitter and talcum powder and can safely say we look perfectly abominable.

We simply can’t wait to see the look on Montmorency’s face when he sees the effort we have gone to…true it is difficult to read the facial features of a psychotic scarecrow, but we tend to guess that when his head is leaning to the left he is in a better mood than when it is leaning to the right, he looks a little friendlier like that you see.

And our furry pals the Dustcats seem to have got into the mood as well!

Anyway, now that we have enough snow to infuriate our landlord we can sit back with a nice cup of tea and begin writing our Wizmas cards. Fortunately, our fabulous friends over at Hopeless Maine have brought out several sets of ‘alternative festive cards’ this year to bring a massive helping of Steampunk Splendidness to the season! ‘Steamed Pudding’ , ‘He Hears His Master’s Holiday Message’ and ‘A Hopeless Holiday’ are available from the Hopeless Maine etsy shop (click the image to go straight there) and can be bought as separate designs or as a multi-pack! So if Robins and Penguins and fat men in red suits are putting you off reminding your loved ones that you still exist and would appreciate cash or brandy this year rather than socks or arrest warrants , no more excuses eh? … 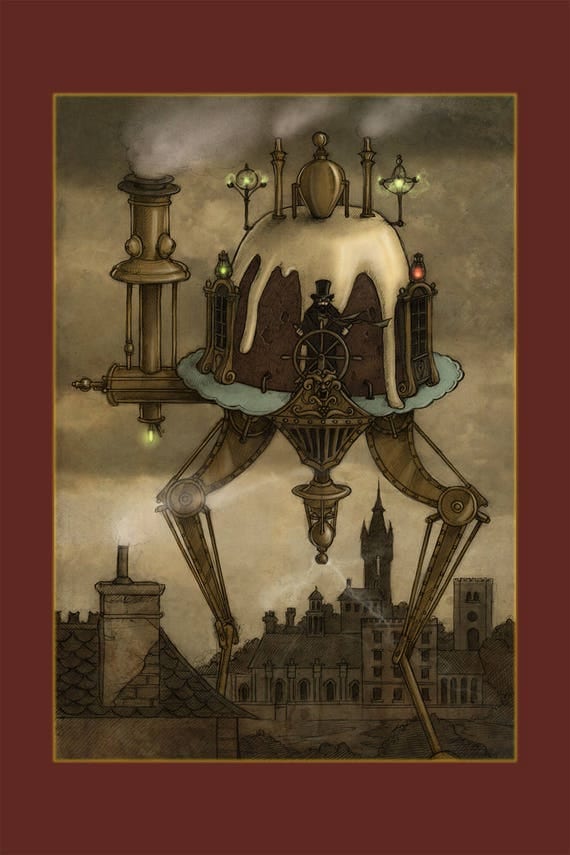 Now all that is needed is some suitably seasonal audios to usher in the afternoon so let us tune in our Tesla Radio and ….

Marvellous! We wish you all a very splendidly snow filled afternoon, and we invite you back to join us soon for more festive fabulousness. So, until then please be always,

Good morning Ladies and Gentlemen! Well, it seems the Dustcats of Hopeless Maine are taking over our little parlour for the festive season in some strange steampunk parody of your earthly tradition of ‘Advent’ . Having put them sternly to bed on the mantle piece again last night we found them this morning in a state of spoons… with yet another odd note…